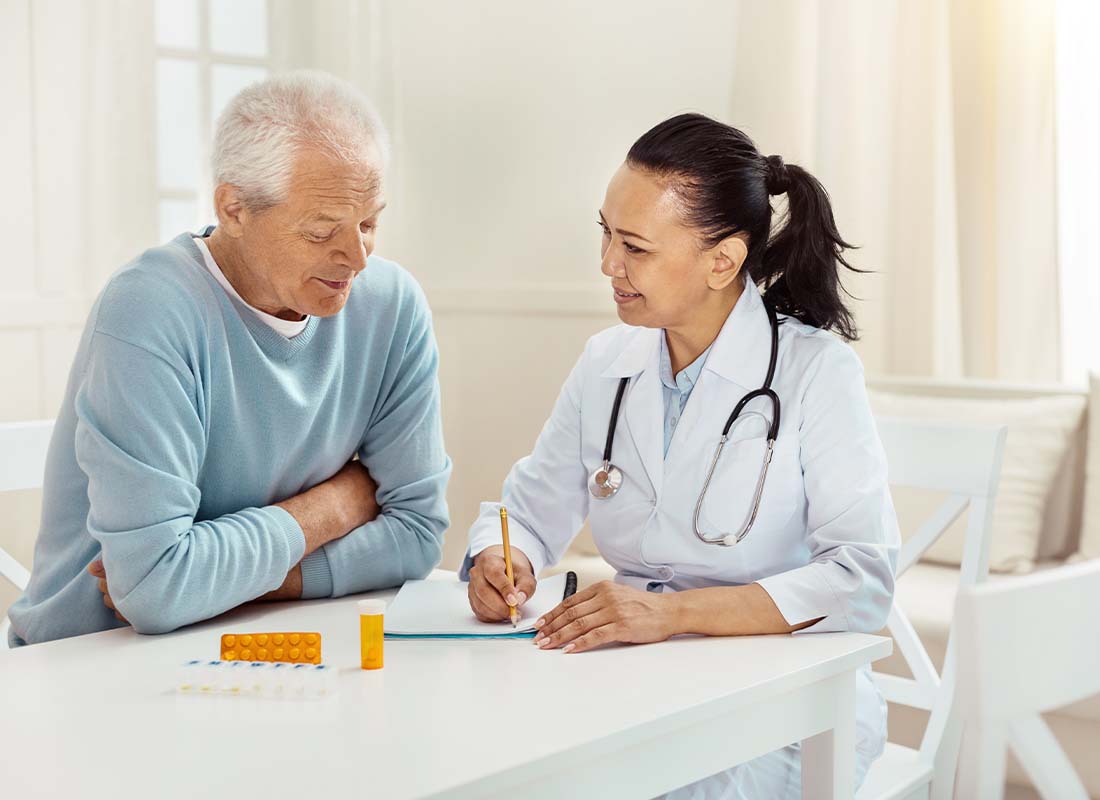 Medicare Part D fills in the gaps of Parts A and B to cover prescription drug costs.

What is Medicare Part D?

Medicare Part D was established in 2003 as part of the Medicare Prescription Drug Improvement and Modernization Act, or MMA. Medicare began to cover prescription drugs under Part D in 2006.

Interactive Graphic
Who Is Medicare For?
Get health coverage for your unique situation.

When you’re retired, unable to work due to disability, or have end-stage renal disease, your options for health coverage become much more limited. Medicare is available to most people aged 65 or older who have paid Medicare taxes while working, as well as some younger people with disabilities or end-stage renal disease. The program is currently administered by the Centers for Medicare and Medicaid Services.

What Are the Four Parts of Medicare?
Understand the Medicare options.

Perhaps one of the more surprising and often confusing things about Medicare is that it’s divided into four parts, and each part covers something different. The different parts of Medicare are Part A, Part B, Part C (Medicare Advantage), and Part D. Medicare Parts A and B are sometimes referred to as Original Medicare. Your health needs will help determine which parts you need or qualify for.

What Is Medicare Part A?
Get coverage for hospital-related expenses.

Medicare Part A covers many hospital-related expenses. These could include hospital stays, hospice, stays in a psychiatric facility, and even home health care in some instances. However, it’s important to note that there are limitations on some of the coverages, such as psychiatric care and long-term care.

How Does Medicare Part A Work?
Learn about enrollment, costs, and more.

You become eligible to enroll in Medicare at 65 and must enroll during specific enrollment windows. Part A is available at no cost to individuals and their spouses who have paid Medicare taxes for at least ten years. Those who cannot receive it free may be eligible for Part A coverage and pay a premium for it. Medicare Part A will pay a portion of the costs associated with a hospital stay, but there are limits and caps to that coverage based on factors like your length of stay and the treatments you receive.

What Is Medicare Part B?
Get coverage for your non-hospital expenses.

Medicare Part B is perhaps easiest to understand as the opposite of Part A. It covers many medical expenses that are not associated with hospital stays, including doctor visits, some outpatient care, and more. For instance, Medicare Part B can cover ambulance rides, vaccines, and certain health screenings. Similar to Part A, there are limitations on certain coverages to take note of.

How Does Medicare Part B Work?
Pay attention to the premiums you’ll have to pay.

Unlike Part A, Part B requires you to pay a premium, and enrollment in the program is voluntary. Enrollment for Part B typically coincides with Part A, but you must still enroll during specific windows. Part B can cover some of the costs associated with diagnosis, treatment, and preventative care. Similar to private insurance, most preventative services are provided at no cost. However, many other services are typically subject to a deductible and coinsurance.

What Is Medicare Part D?
Get coverage for prescription drugs.

If you have both Medicare Part A and Part B, you could enroll in Medicare Part D as an optional coverage through a private insurance company. Part D helps to cover some of the costs associated with prescription medication. Similar to private health insurance, the price of your prescriptions depends on a number of factors, including the formulary, the “tier” your drug falls under, the pharmacy you use, and more. You’ll pay a premium for this coverage, and charges will be subject to a deductible and coinsurance. After a certain amount is spent, you may enter the coverage gap, or “donut hole,” where the plan won’t pay any benefits. If you incur significant expenses, you may get past this gap and move into “catastrophic coverage,” where you’ll pay very little for your prescriptions.

What Services Does Medicare Not Cover?
There are limitations to your Medicare coverage.

While it may seem like Medicare covers many of your medical needs, there are some things that it doesn’t. For instance, dental, vision, and hearing visits and treatments are typically not covered. Long-term custodial care is also not covered. These health expenses would need to be paid out-of-pocket or via a supplemental insurance policy. In addition, if you’re interested in any cosmetic medical procedures or procedures outside of the US, those typically aren’t covered either.

What Are Medicare Supplement Plans?
Boost your Medicare plan with supplemental coverage.

Medicare supplement plans, also known as Medigap, are optional coverage plans available to individuals who have both Medicare Parts A and B who want to supplement their Medicare coverage. These supplement plans can help cover more of the out-of-pocket costs of your health expenses, including copayments, coinsurance, and deductibles. However, as of 2006, Medigap plans do not provide prescription drug coverage and often don’t cover long-term care, hearing, dental, or vision-related expenses

What Is Final Expense Insurance?
Prepare for end-of-life expenses.

Funerals and other end-of-life expenses can be significant, costing your loved ones a lot of money. Unfortunately, Medicare only covers medically-necessary expenses, meaning those needed to diagnose or treat a condition or illness, and funerals don’t fall into that category. That’s where final expense insurance comes in. You can typically get a plan for a relatively low cost without a medical exam. Final expense insurance isn’t part of Medicare, but it can help cover expenses such as embalming, cremation, hearse fees, and more that Medicare does not cover.

What Are Hospital Indemnity Plans?
Consider extended coverage for your hospital stay.

Even though Medicare Part A and Medicare Advantage provide coverage for many of your hospital stay expenses, you are still responsible for some out-of-pocket costs, which can add up quickly. A hospital indemnity plan can help supplement your Medicare Part A or Medicare Advantage coverage. Although these plans will differ from one company to another, they often provide a cash benefit for every day you are in the hospital within your chosen benefit period, which can help cover the out-of-pocket costs you incur.

Does Medicare Include Dental, Vision, and Hearing Coverage?
You’ll need to look into standalone plans.

Unfortunately, Medicare plans only cover expenses that are considered medically necessary. That means most of your dental, vision, and hearing needs—including dental exams and procedures, vision exams and glasses, and hearing aids, for example—are not covered under Medicare, and only a handful of Medicare Advantage plans may provide this kind of coverage. You’ll need to turn to standalone plans offered by private insurance companies to fill the gaps in your Medicare plan. You can often find plans where these policies are bundled together, or you can choose to get separate plans.

What If You’re Younger Than 65?
If you don’t qualify for Medicare yet, there may be a solution.

The Affordable Care Act (ACA) and short-term medical plans may offer you the health coverage you need. ACA differs from short-term medical insurance, so it’s important to consider your needs when choosing between the two. ACA is subject to federal regulations that mandate minimum coverage, and you can’t be turned away because of a pre-existing condition, which can result in higher premiums. Short-term medical plans typically have lower premiums, but they have more limitations on your coverage, and you can be turned away based on your health.

How does Part D work?

There are various costs associated with Medicare Part D. Upon enrolling, you will pay a premium. This will be in addition to any premium you pay for Part B. Your premium will be higher if you are subject to the late enrollment penalty. Here are some reasons why you might want to choose Medicare Part D:

Each year, you’ll need to pay a deductible before Part D begins paying for drugs. The deductible can vary depending on your plan, but each year there is a maximum set by Medicare. Once you’ve met your deductible, the plan will pay a portion of the cost of your prescription drugs. The amount paid will be based on the formulary, which assigns each drug to a tier. Drug tiers are usually based on whether a drug is a generic or brand name and how much the drug costs.

After you and the plan have paid a certain amount for prescription drugs, you will enter what’s called the coverage gap. This is often also referred to as the donut hole. The amount of the coverage gap or donut hole is established annually. While in the coverage gap, there is a limit to what the plan will pay for drugs. Again, the amount you’ll pay while in the gap can vary based on your plan and the drugs you purchase. You may also qualify for the Extra Help program, a plan that helps those with limited incomes and resources pay for the costs of Part D.

After you’ve spent a specified dollar amount within the coverage gap, you’ll move out of it. Subsequently, you’ll move to a segment referred to as catastrophic coverage. When you have catastrophic coverage, you’ll only pay a small amount for drugs for the remainder of the year. The amount you’ll need to spend, like the other costs associated with Part D, is determined annually.

You might not need Part D if you have Medicare Advantage.

Contact us if you have questions about Medicare Part D and your other drug coverage options.

We're here to help you explore your coverage options.

Experience the Value of an Independent Agency

At Employee Benefit Exchange, Corp., we are committed to provide superior customer service and be a trusted strategic partner to all our valued clients. We promise to serve with a sense of warmth, friendliness, and individual sense of pride.